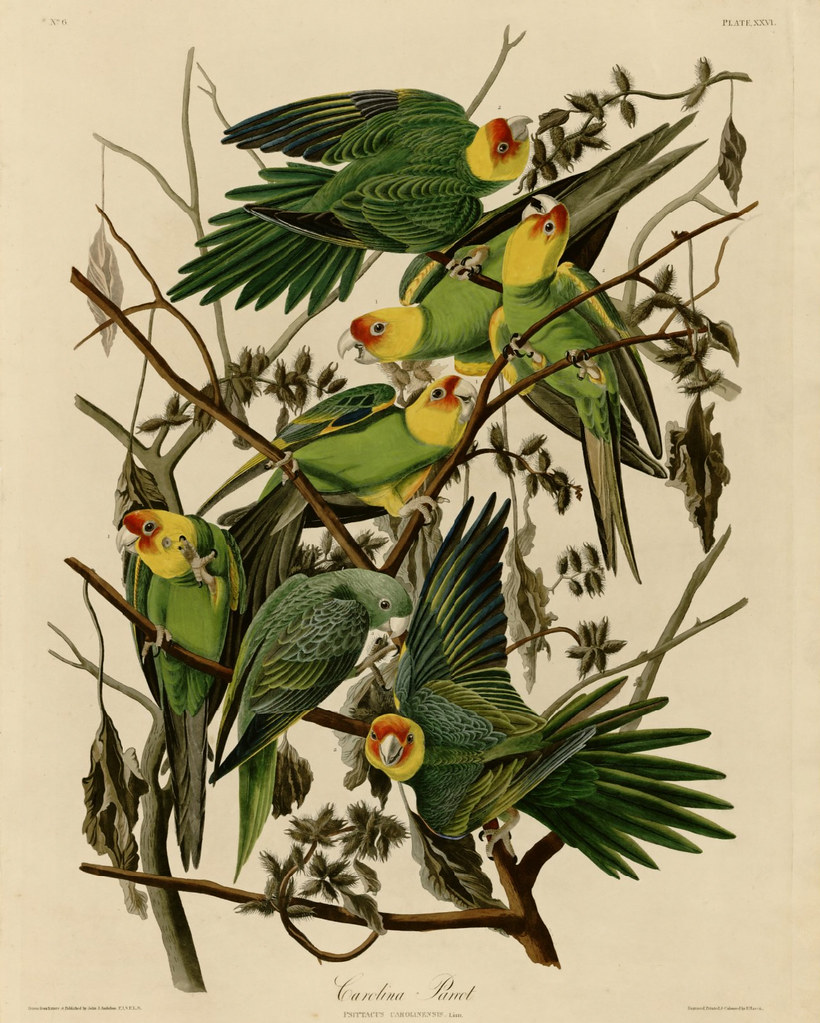 This gorgeous bird, the only native parakeet ever breeding north of the Mexican border, was wiped out by humans. The last one died in captivity in the Cincinnati Zoo on February 21, 1918. Scientists have confirmed that the species’ population was robust and healthy right up until Europeans invaded America and expanded. You can read the BBC News account, “Humans sole culprits in US parrot extinction” here.

My absolute favorite of all Audubon’s paintings is the one for this species—you can tell how fond he was of them by how the one bird is looking directly at the viewer. But even he participated in their slaughter. He wrote in his Birds of America, after describing how they feed on cocklebur:

Do not imagine, reader, that all these outrages are borne without severe retaliation on the part of the planters. So far from this, the Parakeets are destroyed in great numbers, for whilst busily engaged in plucking off the fruits or tearing the grain from the stacks, the husbandman approaches them with perfect ease, and commits great slaughter among them. All the survivors rise, shriek, fly round about for a few minutes, and again alight on the very place of most imminent danger. The gun is kept at work; eight or ten, or even twenty, are killed at every discharge. The living birds, as if conscious of the death of their companions, sweep over their bodies, screaming as loud as ever, but still return to the stack to be shot at, until so few remain alive, that the farmer does not consider it worth his while to spend more of his ammunition.

I have seen several hundreds destroyed in this manner in the course of a few hours, and have procured a basketful of these birds at a few shots, in order to make choice of good specimens for drawing the figures by which this species is represented in the plate now under your consideration.