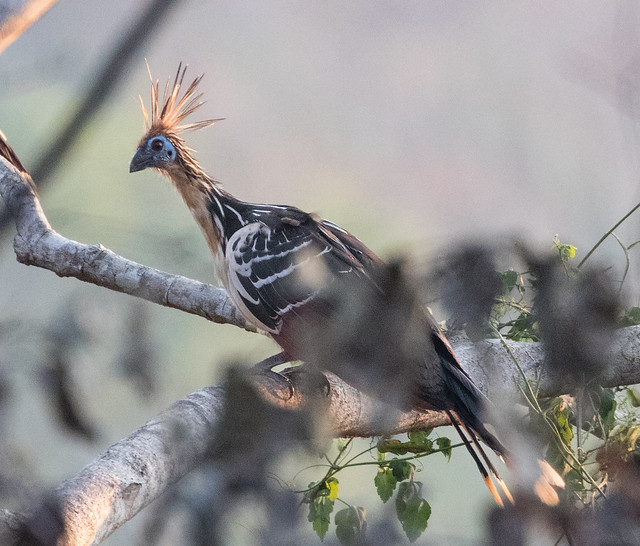 The pheasant-sized Hoatzin, a bird of the swamps, riparian forests, and mangroves of the Amazon and the Orinoco Delta in South America, is the only species in the family Opisthocomidae, named for the Greek, “Wearing long hair behind,” referring to the long feathers that form its funky, loose crest.

Hoatzins are unique in several ways. Unlike virtually all birds, they efficiently digest leaves, which comprise over 80 percent of their total diet. They are specialized for digesting them in their foregut by fermentation, in a way fairly similar to that of mammalian ruminants. But instead of a multi-chambered stomach, Hoatzins have an unusually large crop, folded in two chambers, and a large, multi-chambered lower oesophagus. Their stomach chamber and gizzard are much smaller than in other birds, but their crop is so large that it displaces the flight muscles and keel of the sternum, making them extremely poor fliers. Fermentation in that oversized crop is smelly, giving Hoatzins their nickname, the stinkbird.

If their digestive system weren’t enough to make Hoatzins exceptional, they are famous for the two claws that young birds sport on each wing. These well-developed claws help the awkward youngsters scramble through trees until they get more coordinated. The claws disappear as the young birds mature.

In the tropics, most slow-flying birds the size of Hoatzins are endangered thanks to excessive hunting, but Hoatzins have a longstanding reputation for having bad-tasting meat due to the offensive odor of their digestive system. They also benefit from living in such wet habitat—deforestation in their range occurs in upland forests that can support heavy logging equipment, not the wetlands along the Amazon and its tributaries. So unlike many tropical birds in their range, Hoatzin numbers remain fairly strong.