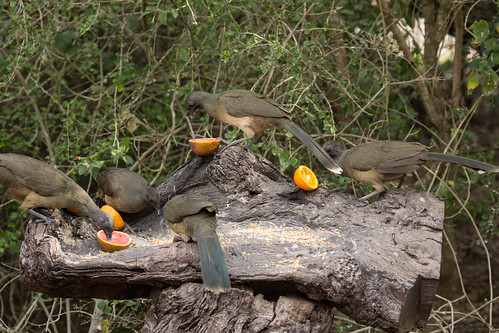 This splendid bird is always one of the most-wanted target birds for birders headed to South Texas. Like other game birds it can be shy, but from the safety of some bird refuges, it can be seen easily, especially at feeding stations. It can be found from the Rio Grande Valley down to northern Nicaragua, with a disjunct population in northern Costa Rica, in habitats where forests are interspersed with scrub and savannas. A vegetarian, it eats fruits, seeds, leaves, and flowers, and is occasionally considered an agricultural pest on tomatoes, cucumbers, etc. Its raucous cha-cha-LAW-ka calls give it its name.