For the Birds Radio Program: My chickadees and the hawk

How much do we take sides in predator-prey issues? 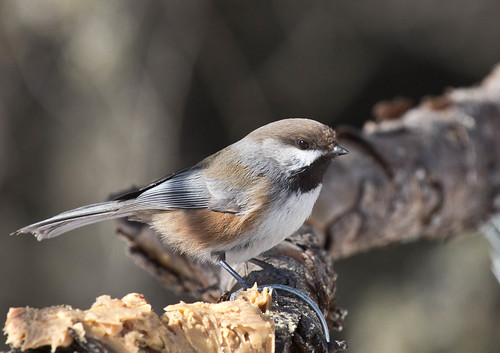 All this winter some Boreal Chickadees hung out with Black-capped Chickadees in my neighborhood. There were three until late January, when two began competing for the affection of the third. When thoughts turn to love in the bird world, three’s a crowd, and the odd bird out was chased away in early February. Since then, the mated pair have been inseparable, always feeding and preening within a few feet of each other.

That is, until last Sunday–when a Sharp-shinned Hawk appeared. My redpolls, which had been pigging out on sunflower seeds all morning, suddenly vanished. Sure enough, a sharpie was sitting in a popple near the feeder. The first Sharp-shinned Hawk of the year is a lot more exciting than a bunch of Common Redpolls, and this one was an adult. I could see its glittering ruby eyes and the fine rust-colored barring of its breast. It took off, flying across the yard in typical flap-flap- soar hunting flight. I was very much pleased with my sighting, even though the chickadees stayed away the rest of the day.

Monday, I kept watch. The chickadees came later than usual, and I couldn’t spot the Boreals. Finally I caught a glimpse of one in a spruce, and it obligingly dropped to the feeder to nibble at some peanut butter. But I couldn’t find its mate.

I started thinking some nasty thoughts about that Sharp-shinned Hawk–a bird perfectly adapted to killing and eating little birds. Its red eye seemed sinister in my memory, its flight threatening and evil. Why couldn’t it have taken a nice fat redpoll instead?

I was crabby all through lunch–reheated lasagne–while I brooded about the audacity of that hawk. But then I took a good look at my plate. Wasn’t the hamburger in that tasty treat taken from a slaughtered cow? And for all I know, the cow might even have come from Brazil, where clear-cutting for agriculture is destroying the tropical rain forest. Suddenly I could see that Sharp-shinned Hawk the way it really was–a fellow creature, hungry and struggling to make its way in the world the only way possible for an accipiter. At the very moment I made peace with the hawk in my mind, who should improbably make an appearance but my Boreal Chickadees–and not just one, but both of them.

It’s hard for a lot of us to accept predation when the prey arouses our affection–like the white-footed mouse that’s been under my stove all winter. I don’t have the heart to banish it outdoors where it might get eaten by one of my favorite birds, the Boreal Owl–even though Boreal Owls themselves get mighty hungry. We leave the mouse Spoon- Sized Shredded Wheat where our cat Sasha can’t reach. We adopted Sasha last winter–she’d been a stray surviving on the neighborhood redpolls. Redpolls are blameless in the overall scheme of the universe–they eat seeds, but the plants themselves thrive. Boreal Chickadees eat mostly insect larvae in tree crevices–they’re predators as much as Sharp- shinned Hawks, even if their prey is small and insignificant in our eyes. Even the vegetarians among us survive through the deaths of living plants. I’ll try never to begrudge any living creature an honest meal, but, then again, I sure am glad that my Boreal Chickadees weren’t breakfast for a Sharp-shinned Hawk.