Many other foods we buy are produced in bird-unfriendly ways. For example, most fruits and vegetables and virtually all the grains used to make cereals, breads, and flour are produced in monocultures using environmentally damaging farming methods such as irrigation, fertilizers, and pesticides. Jeff Pentel, who ran a bird-feeding store in Bozeman, Montana, during the 1990s, told me that his customers often reported dead and dying robins after crop dusters flew over potato fields. Agriculture and grazing often provide opportunities for invasive weeds to plague an area, spilling over into the more natural surroundings. Cheatgrass has taken over rangeland in the West, reducing the amount of sage grass and in turn contributing to a huge reduction in the population of Greater Sage-Grouse. 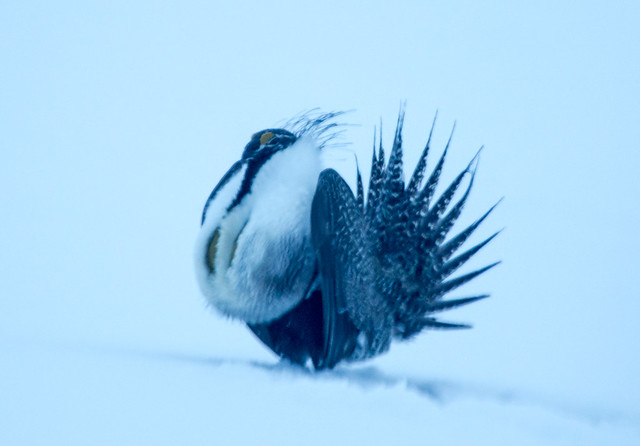 Small family farms traditionally maintained fencerows and other remnants of natural habitat. But now many crops are grown intensively in monocultures, destroying even the smallest remnants of natural habitat. Growing sugar involves pesticides and heavy irrigation as well as habitat disruption. Sugarcane fields have encroached on the Florida Everglades, causing devastating and lasting damage to this fragile and important national treasure. Orange groves, tea plantations, and corn, wheat, and soybean fields are also proliferating. As the human population grows, more of the earth is converted to agricultural uses to feed people.

Some methods of agriculture are far more sustainable over the long term than others. The increasingly intensive agricultural practices of corporate farms are much more damaging than the practices of many family farms. Because of legal requirements, any food labeled “organic” must have been grown without pesticides or manufactured fertilizers and is generally more bird-friendly compared with other foods. But it can be tricky to identify which products were produced in ways that are safe for birds. Here are some foods with serious implications for birds.

Consumers should demand that the fish sold in grocery stores bear labels indicating how much mercury it contains. Only if consumers are aware of mercury levels will they start calling for power companies, other corporations, and the government to reduce emissions and clean up after themselves. Refusing to buy fish with high levels of mercury also encourages the fishing, food processing, and retailing industries to put pressure on the government to set strict limits for mercury emissions and to enforce those limits. This not only protects human health; it also protects the eagles, osprey, herons, and other birds that share our appetite for fish. 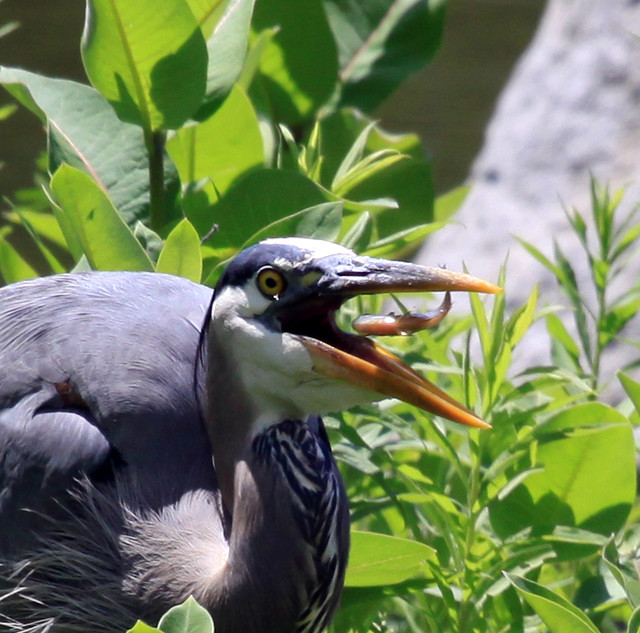 Ocean fish are caught in ways that kill many seabirds each year. According to the American Bird Conservancy:

Hundreds of thousands of albatrosses and other seabirds are being killed each year by the fleets of longline fishing vessels which now crisscross the world’s oceans. The longliners set lines up to 60 miles long and may use up to 30,000 baited hooks on each set to catch tuna, swordfish, cod, halibut, Patagonian toothfish (Chilean sea bass), and other fish. While the longlines are being set behind the fishing boats, albatrosses and other seabirds grab the bait and become impaled on the barbed hooks, either caught by their bills, or hooked into their bodies and wings. Dragged under the surface, the birds are unable to free themselves and drown. Data show that this mortality is having a significant impact on populations, with many species showing rapid recent declines. Scientists now fear that unless action is taken, many seabird species will become extinct. 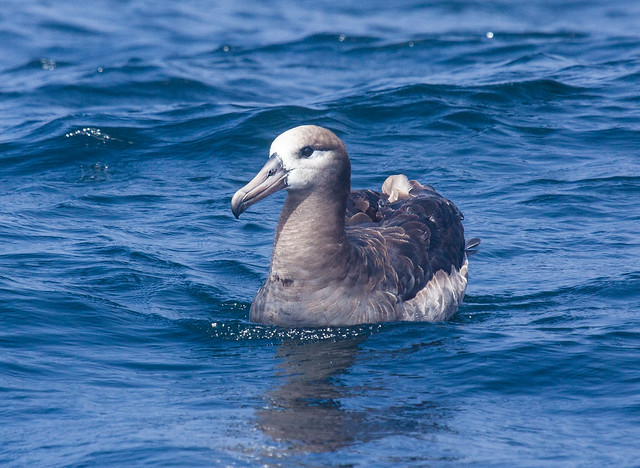 Although longlining is increasing, an alternative does exist. According to the American Bird Conservancy:

Bird-scaring or “tori” lines (tori meaning bird in Japanese) have been shown to virtually eliminate seabird mortality caused by longlines. They were first developed by Japanese bluefin tuna fishermen who recognized that keeping birds off bait was in their own economic interest, as leaving more bait for fish increases the chances of success. The tori lines are mounted on poles at the stern of the boat, and are connected to a floating buoy that is dragged behind the vessel. Colored streamers are attached to the lines, and these flap erratically in the wind above the area where the bait enters the water. When the longlines are properly weighted, they sink immediately behind the boat and the flapping streamers scare the birds away. By the time the baited hooks are beyond the streamer zone, they have already sunk below the depth where they can be reached by most seabirds. In Hawaii, where lines are set at shallower depths than in Alaska, regulations are in place that require thawing the bait so it sinks more quickly, dyeing bait blue so it is less visible to birds, adding weights so the lines sink more quickly, setting lines at night when fewer birds are feeding, and strategically discharging offal during line setting, so that birds are attracted away from the boat’s stern where the lines are set (or not discharging offal at all, so fewer birds are attracted to the boat). These measures also have been shown to be effective means of reducing seabird mortality.

But how are consumers to know whether the fish or seafood they buy was captured in a bird-safe manner? Until informative labeling becomes mandatory, you can carry a Pocket Seafood Selector, offered for free on the Web sites of several environmental organizations, that can help you make quick decisions in restaurants and grocery stores.

Corn is one of the most pesticide-intensive of all crops. In the same way that pathogens can develop resistance to antibiotics, insects can develop resistance to pesticides. Intensive and prolonged use of any insecticide creates a high selection pressure for pests that are resistant to the pesticide. Thus, insects may rapidly become resistant, leading to the use of even more pesticides. Sometimes, in secondary outbreaks, the pests come back much stronger than those in the original infestation, due to both their own increased resistance and the loss of natural predators. And with just about all pesticides, there is a serious risk of toxicity or deleterious health effects in nontarget species, including humans.

One form of genetically modified corn was developed to limit the need for broad-spectrum insecticides. “Btk corn” includes genetic material from a naturally occurring soil bacterium, Bacillus thuringiensis, which produces a protein that kills the larvae of butterflies and moths. The intended target of this “built-in pesticide” was the European corn borer, a caterpillar that not only damages corn directly but also indirectly fosters fungal growth in the damaged corn. The whole point of developing Btk corn was to reduce the dependence on dangerous insecticides and fungicides, and indeed, Btk cornfields are safer for birds than are other nonorganic cornfields. Unfortunately, nontarget insects, including monarch butterflies, that feed on Btk corn or on the leaves of nearby plants where the corn pollen collects can be killed, too, although almost certainly fewer than are killed when a cornfield is sprayed with insecticides.

However, the contamination of nongenetically modified crops and even naturally occurring plants by genetically modified pollen may present a long-term danger for birds and for us. A 2004 University of Wisconsin study found that “genetically modified crops can spread artificially inserted genes to similar wild plants despite attempts at containing them.” “These [genes] could escape from our ability to control them effectively,” according to wildlife ecology professor Stanley Temple. “Extremely valuable gene pools could change in a way that might result in a loss of genetic variation … and lead to [extinctions].” The article continued, “Another possible result of escaping transgenes is an increase in the tenacity of wild plants considered weeds, because they would share the same resistance to pests, herbicides and unfavorable climates that crops containing the genes have.” Of course, a resistance to caterpillars would also make them more likely to kill beneficial butterflies and moths, including those species that provide an important food source for birds.

Obviously, the situation is nuanced and complex. How are consumers supposed to make wise decisions about which corn and other field crops to buy? Right now, there is no way to tell from a label whether the product was treated with pesticides, genetically modified, or grown in an environmentally sensitive area, unless it is clearly labeled “organic.” And even if such important data were included on labels, it still wouldn’t be easy to make the wisest and most bird-friendly choice when buying groceries. But the more information we have about the environmental implications of the foods we eat, and the more we keep abreast of new information, the better decisions we can make. Meanwhile, reducing our use of corn oil and corn syrup and of the products that contain them is a start.

Chocolate comes from a small tree of the tropical rain forest interior, Theobroma cacao. Chocolate production isn’t as big an industry as coffee production, but many of the same concerns about damage to the rain forest exist. Searching for organic chocolate produced in sustainable ways helps both tropical birds and our own neotropical migrants. The Rainforest Alliance certifies chocolate grown using environmentally friendly, sustainable methods. 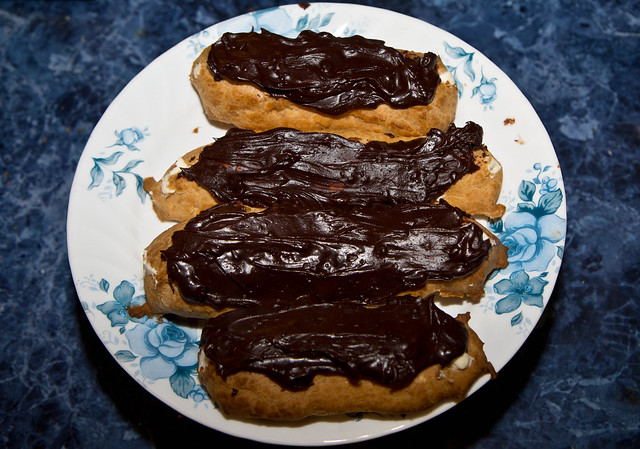 Tea, like coffee, is grown on huge plantations in tropical areas. Although tea is grown mostly in Asia, where it doesn’t affect North American birds, it poses the same risks to Asian birds, other wildlife, and plants as coffee plantations do in the Americas. Some companies work harder than others to ensure that tea is grown in a sustainable, environmentally friendly way. But unlike coffee, it isn’t easy to identify bird-friendly teas yet. Doing research on the Internet about your favorite brands of tea and other products may help you discover which companies are more likely to be using sustainable or even organic agricultural methods.

Sugarcane and sugar beets are both grown intensively, often requiring heavy irrigation and pesticides. Processing these crops into sugar also causes problems, including excessively rich discharge that contributes to the eutrophication of waterways. Like just about everything, sugar is not a substance to be wasted. 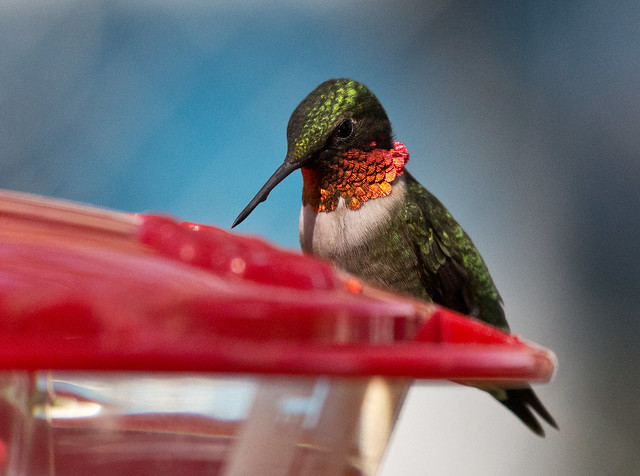 In the final analysis, until food is accurately labeled, buying locally produced, organic groceries is better for ourselves, for birds, and for the environment.