71. Be a responsible boater. I’ve never met a boater who didn’t like seeing Bald Eagles and other cool birds—that’s part of what draws people to the water in the first place. But boating can take a heavy toll on birds, especially in terms of air and water pollution, noise, and disturbance at nesting areas. Motorboats should go slowly anywhere near shorelines where birds nest. Waves from the wake can douse nests, especially those of Common Loons, which are normally constructed right at the water’s edge.

Most motorboaters are reasonable careful, but many of their boats are polluters, as even the owners can attest after breathing the fumes. The National Wildlife Federation notes:

The U.S. government allows motorboat engines to be made with no pollution controls. Smog is formed when exhaust gases rise into the air and are “cooked” in the sunlight. The chemicals in smog can kill plants and burn people’s and animals’ eyes, noses, and throats. Motorboat engines also pollute the water with their exhaust and by spilling oil and gasoline. Every year in the U.S., the total amount of water pollution from motorboats may equal 10 to 15 Exxon Valdez oil spill disasters! The chemicals in this pollution can kill fish eggs and other forms of water life. The U.S. Environmental Protection Agency is looking for the best ways to cut down on air and water pollution from boats.

Although government mandates have been extremely successful in lowering automobile emissions and would certainly work just as well with motorboats, consumers can play an important role, too. When buying a motorboat, let dealers know how important this issue is to you, and make air and water emissions an important criterion for selecting a boat. 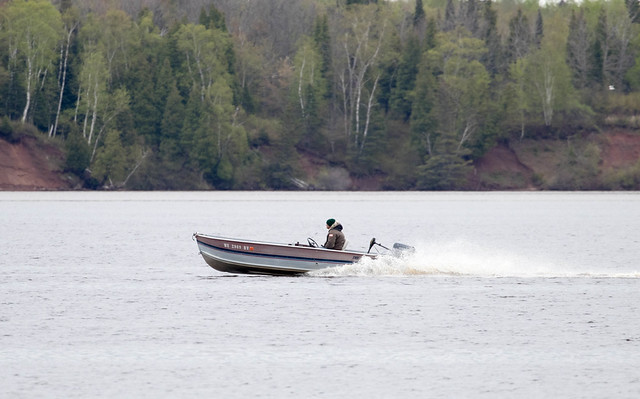 The PWCs differ greatly from conventional boats in design, use and effects on the water resource and surrounding areas. As thrill craft, PWCs have disproportionate horsepower to length and weight ratios. While a traditional boat may have a horsepower to length ratio of 4:1 (a 16-foot craft with a 65-horsepower engine), it is not uncommon for PWCs to have a ratio of 12:1. . .

PWCs are particularly disruptive to wildlife because of their high speeds, unpredictable movements and excessive noise. Because of their size and maneuverability, PWCs are able to enter remote regions and areas of shallow water, which are often used by fish and wildlife as nesting and reproduction habitat. One study of disturbance flights of common terns in New Jersey found that even at slower speeds, PWCs were a significantly stronger source of disturbance than were motor boats. And data from the Florida Game and Freshwater Fish Commission show clearly that PWCs cause wildlife to flush at greater distances, with more complex behavioral responses than observed in disturbances caused by automobiles, all-terrain vehicles, pedestrians, or motorboats.

Pollution is another major concern associated with PWCs. The overwhelming majority of PWCs are powered by two-stroke engines that are infamous for their propensity to pollute both air and water. A study by the Environmental Protection Agency (EPA) concluded that for most personal watercraft up to 30 percent of their fuel and oil can be emitted directly into the water and air. The polycyclic aromatic hydrocarbons that result from the discharged fuel are toxic to various forms of zooplankton, an important link in the aquatic food chain.

Three times, I’ve witnessed PWC drivers steer straight into collections of ducks or shorebirds at high speeds. In two cases, all the birds managed to take off in time. In the third, the boater intentionally drove headlong into a family of Wood Ducks. At least two ducklings were killed outright, and the mother’s wing was mangled; I couldn’t tell how serious her injuries were, but the water was red with her blood. In all three cases, the craft sped away too fast for me to take their numbers to report them. In my opinion, PWC should, as their name implies, be limited to personal waterways—preferably the owners’ swimming pools and bathtubs. They have no place in natural waters. As long as they are allowed there, they should be required to have conspicuous registration numbers that can easily be read from shore.