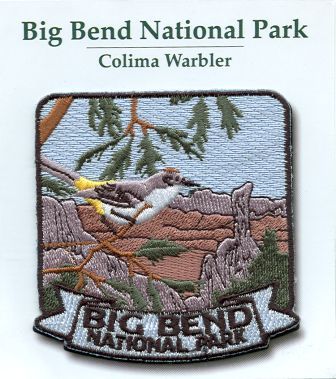 This fairly common but extremely understudied species, found mainly in the Sierra Madre Occidental of central Mexico, can be found in the United States only in the Chisos Mountains of Big Bend National Park, where its breeding habitat is on north-facing slopes of humid canyons above 6,000 feet; the aptly named “Colima Trail” is ideal for finding them in spring and summer. On July 21, 2013, I hiked the Laguna Meadow Trail to the Colima Trail, and then down the Boot Canyon and Pinnacle Trails in a 10-mile or so loop to see it during my Conservation Big Year. Most of my hike was in a steady rain; the bird (and several other birds) broke into song during a brief respite from rain, and I got one good but quick look at a drenched Colima Warbler, but my camera was covered in protective plastic. I want to go back to get photos!

The Colima Warbler is fairly similar to the more common and widespread Virginia’s Warbler but is larger, has a heavier bill, the colorful feathers at the base of the tail are more orangey than yellow, and it’s more buffy than gray on the sides and belly.