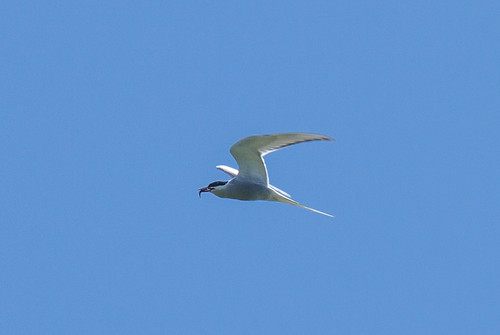 The Arctic Tern, which sees more daylight than any other species on earth, nests along the Arctic Ocean (a few breed as far south as Cape Cod, Massachusetts and off the coast of Maine) and winters on the ice pack around Antarctica. The long journeys twice a year aren’t any more arduous than the long flights this bird makes every day, searching for and plunge-diving to catch fish. During the breeding season, every time a parent catches a fish, it must carry it back to the nest to feed the young. This tern’s buoyant, dainty flight seems effortless and almost fairy-like; birders are often taken aback by its loud, strident, raspy calls, not at all in keeping with its appearance, at least as far as human expectations go.

Their singleminded ferocity in defending their nest is also an unexpected surprise to many birders–they hit hard enough to draw blood. This as well as the remoteness of most of their nesting areas explains why far less work has been done researching their nesting habits than on the related Common Tern.