For the Birds Radio Program: Some questions about birds

Laura answers questions about nighthawks and birds mobbing other birds. (3:20) 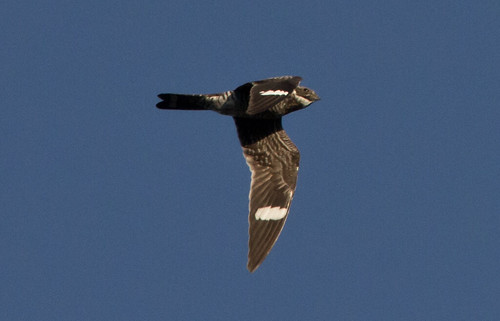 (Recording of a Common Nighthawk)

The most rewarding part of being a radio bird-watcher is hearing from listeners. Many people are shy about asking questions, but I’ve discovered that most people have at least one bird question lurking in the back of their minds just itching for an answer. Outside the UMD Humanities building at twilight last week, one man asked me what those noisy buzzing birds swooping around the streetlights were.

Those are Nighthawks, snatching up insects in the evening sky. This time of year Nighthawks are especially fun to watch as the male performs aerial maneuvers to impress his mate. If you’re lucky, you’ll see him make a deep dive, and then hear his odd booming sound as he pulls up just before hitting the ground.

One listener asked me if it’s possible to see a loon on Lake Superior this time of year. It’s true that most loons prefer the small, quiet wilderness lakes which bejewel the Northland, but some loons do nest along the shore of the big Lake, too. If loons lose their eggs or chicks, they sometimes abandon their wilderness lake for the season and turn up on Superior. And a few straggling migrants can still be found in Duluth. So you don’t have to go to a remote lake to see a loon, although part of the satisfaction of finding this bird comes from being in an area that at least feels remote and wild.

(Recording of a Common Loon)

Lately several people have asked about crows mobbing owls, jays and blackbirds mobbing crows, and little songbirds mobbing jays–this aggressive behavior can be seen all over in June. Although summer is the season of new life in the bird world, which romantics associate with joy and love, in reality it’s a harsh time. A mother crow or jay needs a lot of extra protein and calcium to create four or five young ones–she can hardly run into Super Valu and pick up some choice steaks, a dozen eggs, and some maternity vitamins the way human mothers do. If she spots a nestful of robin eggs just ripe for the taking, how can she resist? A jay will also take nestlings, and inexperienced fledgings hopping in the open. Catbirds often eat the eggs of other birds, and even the tiny House Wren will pugnaciously puncture holes in any eggs it discovers on its territory. The egg robbers don’t always get away with it–one of my own neighborhood blue jays was killed as it carried off a falcon egg. I haven’t been able to discover whether the jay was struck by a car as it flew low over the road with its heavy loot, or whether the nesting merlins killed it–I found its badly damaged body, and the large, smashed egg, in the middle of 47th Avenue and Colorado Street. All in all, the Disney cartoon was right–“It’s Tough to be a Bird.”