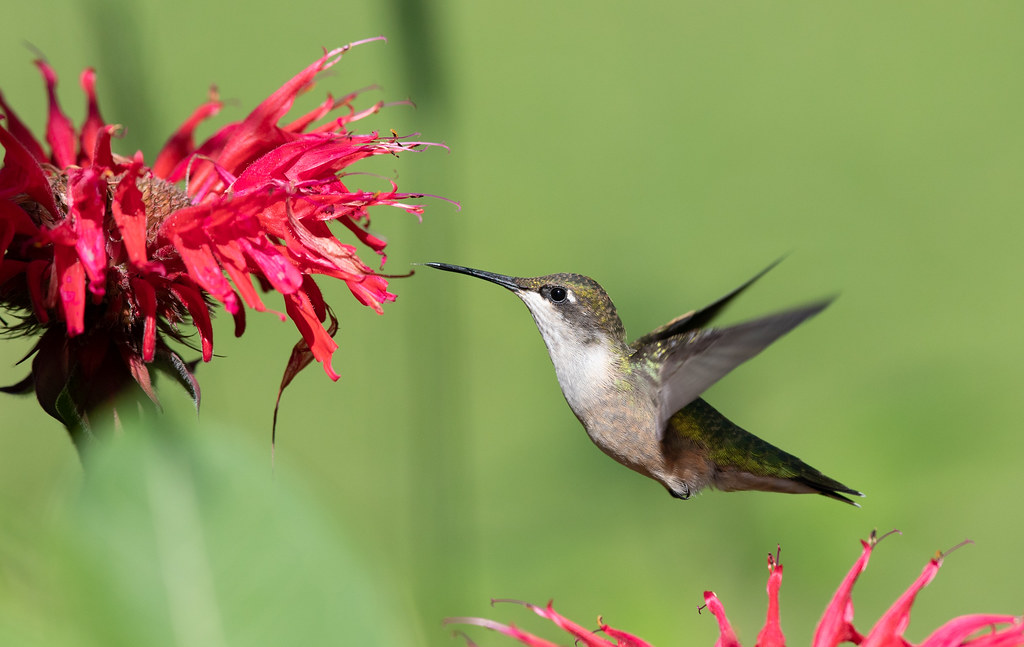 The only breeding hummingbird over most of the eastern United States is one of the most treasured of all backyard birds, though if hummingbirds weighed more, they’d be one of the most dangerous species on the planet due to their pugnaciousness.

Make sure to keep your sugar water fresh—it spoils within a day or two during hot weather, and even during cold spells should be changed at least twice a week. And never, ever use food coloring. It’s unnecessary (hummingbirds are attracted to the color red, but virtually all feeders are brighter red than colored water is), provides absolutely no nutritional value, and several studies and experts have found it to be outright unhealthy.

The Ruby-throated Hummingbird holds a place in the Guinness Book of World Records:

Ruby-throated Hummingbird: Fastest wing-beat of a bird. During courtship, the ruby-throated hummingbird (Archilochus colubris) can produce a wingbeat rate of 200 beats per second as opposed to the normal 90 beats per second produced by all other hummingbirds. The back and head of the hummingbird are irridescent green, the underparts are white, and the males’ throat is bright red. It is very small, only 3 in (7 cm) long and breeds from March-July. Hummingbirds in general possess the fewest number of feathers on a bird.

Wing beats are difficult to quantify, and this record belongs more to the family Trochilidae than to just one heavily studied species when other hummingbirds are likely to have even more rapid wingbeats.